The overall Wacky Racers championship will be won through a POINT-ALLOCATION SYSTEM.  Points will be allocated based on the following criteria: 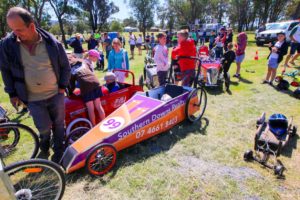 The level of participation in the four heats in the billycart calendar (see The Heats below). Teams can participate in some or all events, with point allocated to each event. The more you attend, the more points you get!

Other points are allocated based on the following criteria:

Presentation is also part of a winning team.

Points will be given to teams that race in these events. The more you attend, the higher your points score!

1. 20th May 2018 at the Bangalow Billycart Derby near the beautiful Byron Bay:

The Wacky Racers will be integrating into this popular and pre-existing event. Points will be given for teams that show up on the day!

2. 3rd June 2018 for category races and 10th June 2018 for FINALS and CELEBRITY races at the Cooly Rocks On Festival in Cooloongatta!

This is the bench-mark Wacky Racers event, which is totally organised and run by Total Driver on behalf of Prepared for Life. It will be held the weekend preceding the main Cooly Rocks On event and during the weekend of the event. It is a MUST ATTEND for the Cooly Rocks On Festival!

This is the third year of Wacky Racers in the Southern Downs, bringing competitors from as far as the sunshine coast, Toowoomba, Koyogle, Ballandeen and other areas.  There is so much to do in and around Warwick, from swimming in the Queen Mary Falls, to Steam Train rides, 4wd adventure and of course, wining and dining with the amazing produce around the area. For accommodation, you cannot go past Eve’s Pitstop Lodge. 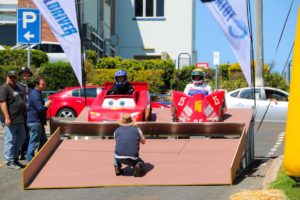 Third year of competition, the Wacky Racers at Warwick is an event not to be missed.

This is the GRAND FINAL in the Wacky Racers Billycart Grand Prix. You can win one of two billycarts valued at over $5000 each!

Teams that build their own billycart, as opposed to borrowing or using the Total Driver carts, will automatically be allocated higher points in the beginning.

Each heat will be divided into the following categories with prizes for the 1st, 2nd and 3rd place holders in each category: 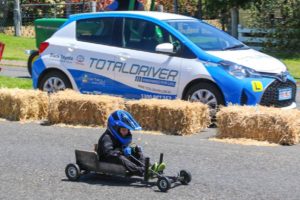 The Race Face is on, the Mindset is go!! All part of the action in the Billycart Grand Prix